sharefun this life year underwear out of the most shining himself

This year is the 12th year of the Lunar New Year belongs to the year, commonly known as phase. In traditional practices, Bennian is often considered an auspicious year. "The life of the year too young prisoners, sitting too young, no hi must have a curse," the ballad is not the most auspicious portrayal of this life portrayal. Therefore, folk usually refer to "Benmingiannian" as "threshold year of childhood", that is, to pass the Bennian year as a threshold. Every year of life, every part of the Han people in northern China, regardless of adults and children, is colored red, commonly known as "red". Children also wear red vests and red pants, thinking that this will work in good spirits and eliminate disasters.

It is said that Taboo of "Benming" has a widespread influence among the people. In the folklore of both North and South, there is a tradition of hanging out red and sheltering from disaster in this life year. Therefore, people are particularly fond of the red color in their own lives. The red color of this life year stems from the worship of the red color of the traditional Chinese Han culture. Well, Bennyun wear "red underwear" argument, what is the reason?

Red evil spirits, red auspicious, this notion already exists in primitive society, red is the color of the sun, the color of the blood is the color of the fire. With the changes of the times, this still red thought has not changed, the New Year Bonus couplet, the Han wedding in the old wedding red wedding dress, red hijab, red candles, new branches of the red list, no matter when and where people Must use red to add festive. The Han people regard red as a symbol of festive celebration, success, loyalty and justice. In particular, the red color has the role of exorcism and protection.

Therefore, in the New Year's Eve, people wear red underwear early on, or fasten red belts. Some of the accessories they wear are also hung with red silk ropes to meet their native life. Think of it in order to relent, avoid disaster disasters. These are the red items that wreak havoc on the natal year that people often call "natal". 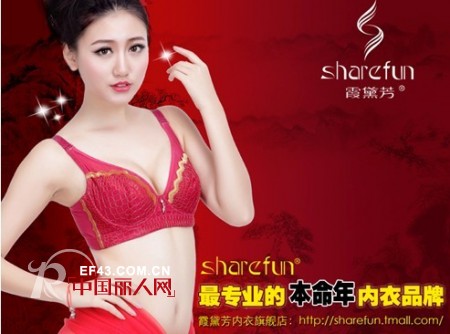 So each woman in his own life even more should have several sets of beautiful and beautiful amulet - the life of the underwear. But now underwear serious homogeneity, how to choose the right brand underwear is crucial. Let sharefun to tell you how to choose the perfect fit with the body's second layer of skin, in this life to be a perfect woman.

Focus on the underwear area 20 years of Guangdong Xia Dai Fang Underwear Co., Ltd. under the brand "sharefun", has been devoted to studying the design of Bennian series of underwear, the use of various scientific and technological means, measurement, analysis and research, the requirements of the female body shape underwear with comfortable Fabrics, exquisite workmanship is reflected in the underwear, tireless pursuit of the intrinsic charm and external temperament successfully demonstrated, so that you are even more glorious in Bennian year.

Sharefun this life year underwear with charming intoxicating full of red dominate the fashion, dripping to show the temptation to make it overbearing. Underwear overall design elegant and fresh style, with lace, embroidery, rhinestones, flash lines and other materials mix and match to avoid the stereotypes, really make the underwear turned into a woman's "second skin", from "and" Customs, but also to protect the lives of women, a beautiful amulet, is the first choice for women's natural life, pray for peace at the same time revealed the charm style.

Beautiful woman, please take your elegant footsteps, sharefun Benniannei underwear to accompany you in the life of your own life to dress up the most attractive gesture of their own, dancing out the most shining themselves.